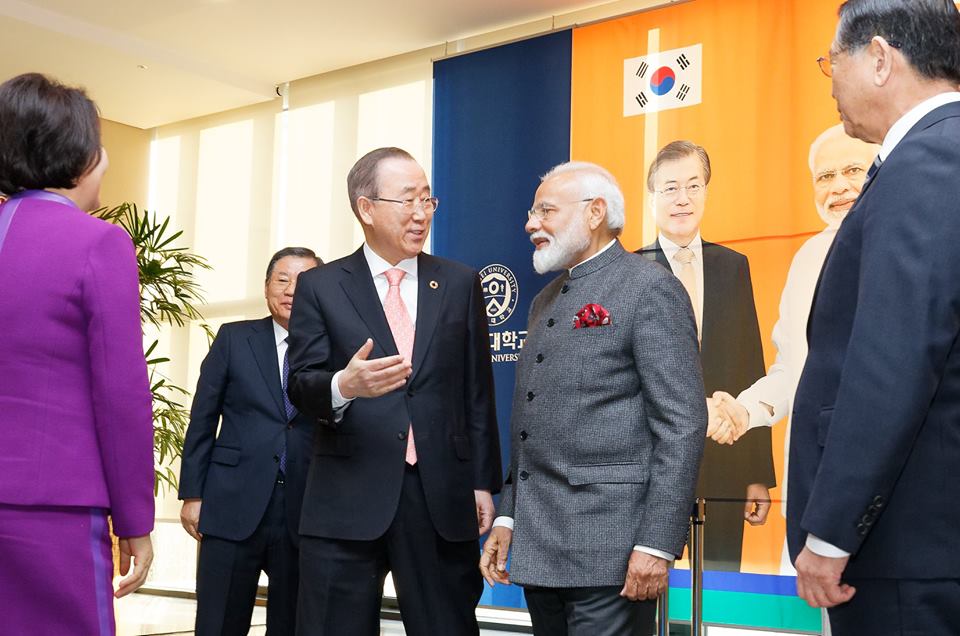 South Korean President Moon Jae-in and Indian Prime Minister Narendra Modi paid a visit to Yonsei University to take part in the ceremonial unveiling of a bust of Mahatma Gandhi which has been donated to the university to mark the 150th anniversary of Gandhi’s birth.

IGEE's Honorary Chair Ban Ki-moon, who is a long-time friend of Premier Modi, said he was inspired by the teachings of Gandhi's.

It is with great pleasure that I welcome His Excellency Prime Minister Narendra Modi to Yonsei University.

During my tenure at the United Nations, Prime Minister has been one of the strongest supporters of UN’s work in world peace, human rights, and climate change. Last year, Prime Minister invited me to serve as one of the international advisory members of the Committee for the Commemoration of Mahatma Gandhi’s 150th Anniversary. An honor I happily accepted.

Today, as his visit to Korea coincides with the 150th anniversary of Mahatma Gandhi’s birth, the government of India has decided to place a bust of this great figure on the campus of Yonsei University.

Personally, I have long been inspired by the teachings of Mahatma Gandhi, particularly the far-reaching description of his Seven Sins:

Science without humanity; and

From this day forward, this gift will serve as a source of inspiration to all Korean people and students of Yonsei University.

It will be a reminder of Gandhi’s words that “The earth, the air, the land and the water are not an inheritance from our forefathers but on loan from our children.” I thank you for your gift today.